A glimpse into the plight of the Syrian people

With much of the attention off of Syria, and onto Ukraine and the Olympics, I thought I would share some photos and information on the present state of the Syrian people.

The Queue for Food at a Syrian Refugee Camp

From the U.N. Relief and Works Agency.

Context: “It is a scene of unimaginable desolation – a crowd of men, women and children stretching as far as the eye can see into the war-devastasted landscape of Yarmouk refugee camp in Syria. This was the queue for aid at a UNRWA distribution point in the capital, Damascus, on 31 January. The UN relief agency has distributed more than 7,000 food parcels in the Palestinian camp, home to about 160,000 people, since 18 January. The UN has reported infant malnutrition in the community, which has been reduced to eating animal feed. As of this week, all aid distributions have been suspended because of security concerns. Chris Gunness, a spokesperson, said UNRWA had received assurances that a deal allowing humanitarian access to Yarmouk would be implemented as soon as possible. He said: “They have suffered enough.”

National Post news story on the matter (more photos inside).

It can be good to take to the streets, but even when such action is necessary… the consequences are long lasting and terrible for everyone.

Consider the following two photos, one of Homs in 2011, and another of the same avenue in 2014, after the devastation. 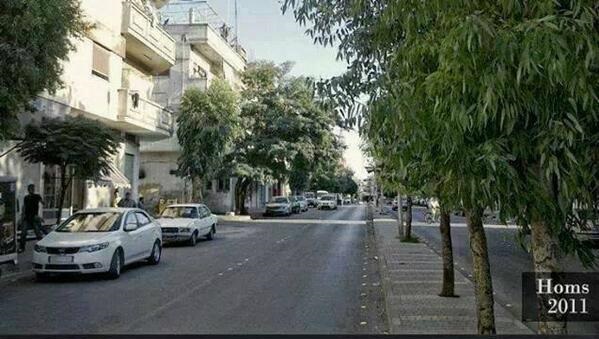 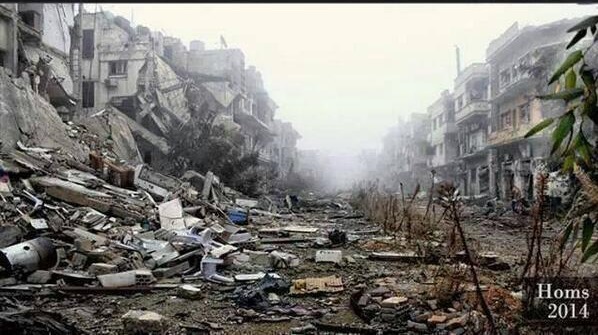 At least for these people, this amounts to the apocalypse, the destruction of everything.

For those interested in donating to this cause, or to any cause, the below link is to the American Institute of Philanthropy, a nonprofit that provides information about charities’ financial efficiency, accountability, governance, and fundraising.

With regard to those who build and manage societies, the below video and word;

I often think but seldom share these thoughts. And if the product of my thinking is to affect anything but my own sense of satisfaction, then surely it must be shared. Here you may try to know what I believe to know.
View all posts by Ossington →
This entry was posted in 2014, Syria, War and tagged Homs, Refugee Camps, syria, U.N. Relief and Works Agency, Ukraine, UNRWA. Bookmark the permalink.