During the election cycle, we are constantly bombarded with reasons why Americans should either vote Republican or Democrat. And, as fans of Ron Paul or Gary Johnson can attest to, either party will work to push out undesirables, and together the two dominant parties push out third party candidates. Why is that? Is this democracy? What’s the deal?

I argue that the reason why we do not get change is that real change has to do with ends and elections only deal with means toward established ends.

Think of the United States, indeed any nation, as being a giant cruise liner. And, with cruise liners, they have destinations which are thought up by those controlling entities and it is only the actual steering of the ship to that destination that is left to the captain. You see, this is how the United States’ presidential election works with respect to the reality that is the state and its interests.

Important elections are really selections. The owners of the boat who have plans for it, select a couple men or women and then give to the constituents of the ship, of the state, a choice as to who will man the wheel, who will talk to the press, who will take the blame and the glory. This is the individual which we vote in or out. We never vote out the owners of the boat, nor do we de-seat the board of directors who plan the destination.

Really, an election is just choosing the means which a country will take, but it never addresses the ends. The only way to address the ends is though either a shift in the common understanding of what must be done, or by the big scary R-word. But, as I will cover in another piece, I don’t believe in this R-word.

Well we don’t hear much about these third party outliers, because it is the model of the United States which is most important. Third party candidates present an alternative to the official position of the state. What is the official position of the state? Victory, or at least acquisition of resources so that it may continue to defend its borders, economy, geopolitical interests and the like. And this is why you do not see mainstream support for anything but what is pushed by the Democrats and Republicans. To give legitimate support, to give a real voice to these third party candidates is akin to giving a voice to a child with respect to a family dynamic.

What does the family want? How much do the wishes of the children have to do with the wishes of the parents? Of course the kids ought to be happy, but there are limits to the dedication to this happiness. The parents wouldn’t cash out their retirement, sell their home and quit their job to give their children the greatest vacation ever, because to do so would really mean that the parents have abandoned their duty as parents, and they would no longer be able to provide for their children. Similarly, the state will not just give in to the immediate needs of the governed and abandon the greater plans and interests which give it the power and reach to be that state that it is.

Now before you go off and get upset at me or at the state, understand that it is in the best interest of the governed that the state is successful. Just as it is good for the children of a family for their parents to prosper.

To give legitimate credence to the wishes of the third party candidates is akin to changing players during a game of risk… and handing power over to someone who doesn’t think as a risk player does. This would bode terribly for that risk player. In fact it would mean absolute defeat for that faction of the game board (assuming all other players continue to play that cutthroat game).

And that’s all this world is on the level of nations, ideologies: it’s just a game of risk. We have borders and there is only so much resources. As a result there is always going to be states looking to acquire resources and temporary partnerships to secure said resources. When we deviate from the high-level plans of the state, then we are met with the legitimate possibility of not gaining these potential resources, and with respect to the larger game at play, possibly losing altogether. And, when the world is thought of as a zero-sum arrangement, this is terribly dangerous. This, I believe, is why our choices are simply Obama and Romney.

Whether you choose the Democrat or the Republican, you’re going to get essentially the same thing. And this isn’t a terrible thing as some may think. Those people who look at democracy with rose colored glasses would think what I am here saying is worthy of ridicule. To those people, I say be real. Come now.

With the reality that little will change between the executive power being held by a Democrat or a Republican, ought we even bother to vote? I argue yes. For, there is still something which you are choosing by voting in one and not the other. This has to do with how the actions of the state will be executed and how these actions will be perceived by its people and by the people who look on from the outside.

As per my choice of the two, I believe Obama is the prudent choice. He is a true statesman, in that he is eloquent, confident, and comes off polite, smart, and willing to compromise. Even if he bombs people all over the place, takes away liberties at home, and threatens the constitution, the Republican option is going to do the same thing! However, if you choose Romney, while you’re going to get much of the same, it’s not going to be so pleasant and it could ferment instability at home and backlash from abroad.
Imagine again a state such as the U.S. as a large cruise ship going at a high rate of speed. The reason why it is capable of sustaining such high speeds is that it doesn’t have to worry about taking tight turns or maneuvers which have fundamental directional changes. The boat has a destination, and whichever captain you are allowed to employ, he’s just going to sail that boat from where we are to where everyone in the know wants it to be. The difference between captains will be the style with which they get it there. 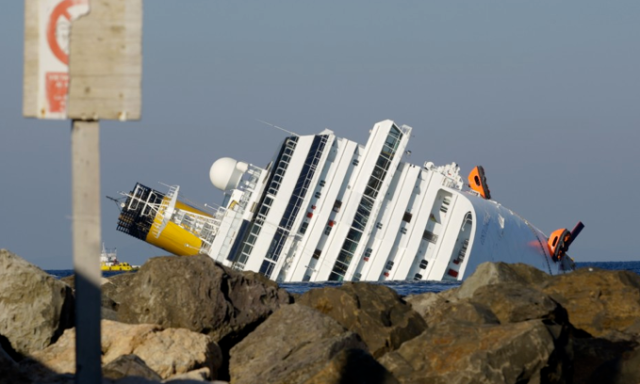 Remember the Costa Concordia? That’s why we ought not elect Romney. That’s not to say that Obama isn’t capable of taking us through rough waters on our journey to the same point on the horizon, but I do believe that he’s the better bet.

In closing, I hope Obama wins. I hope this not for the change which was originally sought in 2008, but for a spin which I believe will help America (and perhaps the world) in its execution of what it needs to do, and what it’s going to do anyway.

Note: I am laying on the political-realist thing pretty thick. I’ll have to come back to power structures in another piece and paint a more hopeful picture.

I often think but seldom share these thoughts. And if the product of my thinking is to affect anything but my own sense of satisfaction, then surely it must be shared. Here you may try to know what I believe to know.
View all posts by Ossington →
This entry was posted in America, capitalism, conjecture, constitution, democrats, freedom, future, liberty, Life, philosophy, political realism, Politics, power structures, republicans, state, stateism, the game of risk, thoughts, Uncategorized, USA, War, world and tagged 2012, Barak Obama, candidates, constitution, Costa Concordia, democrats, election, Gary Johnson, liberty, Mitt Romney, peace, political, politics, power structures, republicans, Ron Paul, selection, state, stateism, the game of risk, third party, war. Bookmark the permalink.